How did it all started?

They have two grown-up children. Kim-Anh is an academic researcher who moved to Brisbane, Australia in 2009. She leads her own group in medical research. Vinh moved to the South of France as a blacksmith where he started his own business, forging homemade knives in the traditional Vietnamese way.

In 1990, the little family moved to Réunion Island, a French department in the Indian Ocean, as they finally could have their jobs in the same city. They used to visit South Africa during some of their holidays, with a first visit in 1997. They were blown away by the beauty and the diversity of the country. It is during this first visit that they discovered Clarens. The idea of retiring in the Free State slowly made its way through … In 2007 they bought a bare piece of land 20km from Clarens. Domaine Sérénité was born. In 2013, when Betty and Huy retired as headmasters of high school they moved to South Africa and called domaine Sérénité their new home.

Huy speaks fluent Vietnamese and French, Betty speaks French and both are now perfectioning their English. 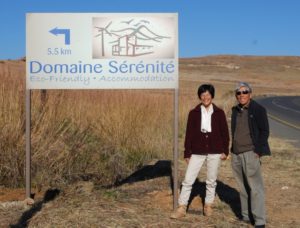 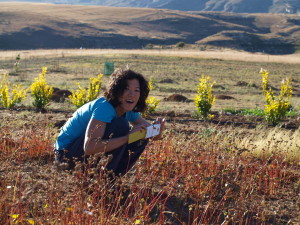 Kim-Anh at Domaine Sérénité in the buckwheat field

Vinh at the forge